"I've had the good fortune to meet, hire, and learn from some great pannel-beaters, but, sadly, it is a dying art form. The good ones I've known have all left the business for one reason or another. Many say that customer's usually can't see and therefore don't want to pay for the time it takes to do good work. It's a market that puts a premium on what looks good that can be done very fast. Another factor is that modern automotive bodies are made up of bolt-on pieces, so the skills required to work on our older Porsches and Karmann Ghias aren't current in the market any longer."

"I never wanted to become a bodyworker - a bodyman, metalman, panel-beater, or whatever else you care to call people who can fix automotive bodies. All I wanted was to have beautiful cars. If you own a Porsche 356 or Karmann Ghia - and actually drive it - sooner or later you're going to need to have some bodywork done. So, I hired out jobs like any other hapless automobile owner who's car has become damaged. However, over the years, I became increasingly frustrated with the shortage of truly competent body-workers and that in spite of putting 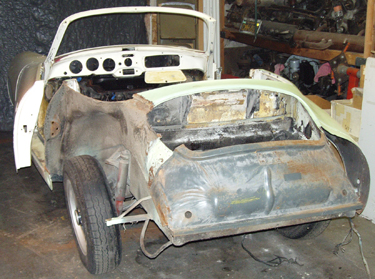 up with flaky people, and all the problems related to getting body work done, on nearly every occasion, I received my car back with either more damage or new damage or sometimes both! Oh, sure, they looked pretty, but what I wanted was a competent repair, inside and out, not just something that looked good - it has to actually be good!" "Eventually, I ventured forth and decided that for the money I was paying I might as well buy the tools as I'm perfectly capable of adding damage myself at much lower cost! And so I entered the realm of becoming a bodyman. My contempt for the trade soared as I performed my very first metal body-work. I'd bought a measly $150 worth of good quality hammers and dollies and a book on the Fairmount Method of body-repair - last updated in 1953! On my first attempt, I knocked a cantaloup sized dent out of the nose of a Karmann Ghia and straightened the areas where the bumper tips had injured the fenders below the headlights. In all of 40 minutes, I'd done better work than I had become accustomed to paying about $1100 to $1500 for! Yowzer! ...I became convinced that the vast majority of supposed bodymen don't know the first thing about their own trade. In reading up on the Fairmount Method, I read of how the usual "rough-em-out, smooth-em-over methods" add damage and I learned that I was right! Way back in the 1930s and '50s, long before the invention of "Bondo", someone had written up in this book how most guys actually take longer to do a job and do a worse job of it because they don't really understand sheet metal damage. ...Sound like I'm crazy? For a mere $18, post paid, I'll send you your own copy of this easy-to-read bible of automotive body repair. You can then judge for yourself."